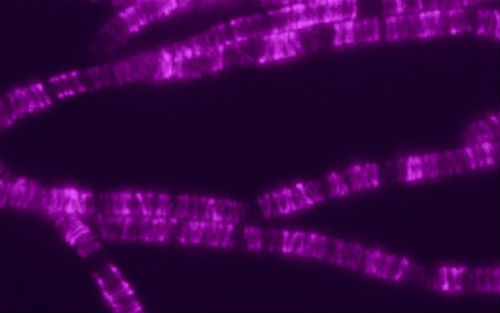 Harvard Medical School scientists found that almost all of the bacteria use to build and maintain a new family of proteins in the cell wall.

Study leader David Rudner and Thomas Bernhardt said, found a second set of cell wall synthesis may help to develop a much-needed therapy to target the cell wall as a way to pave the way to kill harmful bacteria. The results published on August 15 in Nature.

Author of the paper and Professor of Immunobiology at Harvard Medical Microbiology Rudner said: "We know that these proteins are excellent targets, because we can inhibit these enzymes from outside the cell.”

Co-author of the paper, and professor of Immunobiology at Harvard Medical Microbiology Bernhardt said: “We now better understand the function of these proteins, as well as a potential drugs may affect their activity.”

Maintaining the structural integrity of the bacterial cell wall , determine its shape and withstand external attack from toxins, drugs and viruses , it plays a vital role . Cell wall is linked together by a short peptide chains composed of sugar.

For half a century, people think penicillin-binding protein is a major, there may be the only person in the cell wall synthesis.

Penicillin was discovered in 1928 , for the first time in 1942 for the treatment of bacterial infections, but until 1957, scientists did not know the mechanism of bacterial cell wall penicillin blocking build these proteins . The 1970s and 1980s study of E. coli to elaborate a mechanism penicillin-binding protein to build cell walls.

Later, some clues appear suggests that there may be other factors involved in cell wall biosynthesis. In 2003, it generated a significant research in this area has been overlooked by many people found that: in the absence of penicillin-binding protein, Bacillus subtilis (Bacillus subtilis) can be grown and its cell wall synthesis. Some researchers of this "missing polymerase ", sometimes known as "part-time enzyme" very interested

Co -author, former Harvard Medical School laboratory researcher Tsuyoshi Uehara Bernhardt believes that a cell shape, elongation, division and spore formation responsible for a family of proteins: SEDS protein may be the main suspect of the missing enzyme. SEDS moving along in a manner surrounding bacterial cells, suggesting that they may be involved in the synthesis of the cell wall, if they disrupt inactivation of cell wall synthesis.

To verify the SEDS protein may be involved in cell wall synthesis of this hypothesis, the first author of the paper, Rudner lab, Harvard Medical School graduate Alexander Meeske, delete participate in the polymerization of the cell wall of all known penicillin-binding protein. The SEDS original protein as in almost the same way as to continue to move. Observations such SEDS protein looks like a missing enzyme, and more like a major role factors rather than just part-time. Subsequent experiments confirmed that genetics and biochemistry, SEDS protein is indeed a new cell wall synthesis by family.

The researchers said some previous studies showed that when penicillin-binding protein blocking the bacteria will die, obscure the importance of SEDS protein.

In the current paper, the scientists found that compared to penicillin-binding protein, SEDS protein in bacteria is more common, which brought hope for us: an antibiotic protein a potential target SEDS can be effective against a broad spectrum of bacteria.

Bernhardt said: " For a long time , in this area a group of enzymes believed to play a role in a complex built in a wall and now we get the two enzymes , they seem to play a role in different systems do not know. Wherefore, they must be coordinated to build the network structure to maintain integrity, and with cell growth and division and expand. "