Improving enzymatic and chemical stability of peptides by chemical modifications

Cyclisation techniques have been used widely in the peptide field and achieved in several ways from cyclising head to tail, head/tail to side chain or side chain to side chain.

A type of side chain to side chain cyclisation is called stapling, a technique that enables the peptide to be locked into a desired conformation. Peptide stapling is used commonly to enhance a peptide’s secondary structure such as a-helices and b-turns, which can improve the binding affinity to the target and enhance ADME properties.

There are two subgroups of peptide stapling (PS): onecomponent (1C) and two-component (2C). In one-component peptide stapling (1C-PS) there is an intramolecular linkage between often unnatural amino acid side chains and can allow cyclisation depending on the secondary structure.

One of the first examples of 1C-PS was by Blackwell and Grubbs through the use of ring-closing metathesis (RCM) of Oallyl serine residues. 1C-PS is not without its limitations. For example, modifications would result in the entire peptide being resynthesized, which could prove costly in both time and materials. However, 1C-PS has proved successful in many cases exemplified by the first stapled peptide ALRN-5281 to reach clinical trials and complete Phase I. ALRN-5281 is used to treat adult growth hormone deficiency and was cyclised through the use of 1C-PS via RCM.

Peptide stapling more recently has moved the focus away from 1C-PS to two-component peptide stapling (2C-PS) (Fig. 1). The use of 2C-PS offers many advantages over 1C-PS and allows synthetic versatility through the use of linear peptides and separate staples. 2C-PS allows modifications to be made at a late stage if needed to the peptide or the staple, which is highly beneficial for an optimization campaign. 2C-PS has been widely applied to bicycles therapeutics developed by Christian Heinis and Sir Greg Winter. The overall concept of bicycles is the cross-linking of three cysteine residues to a tri-functionalised linker to form a bicycle construct.

Moving away from proteinogenic amino acids

Side chains of amino acids offer another excellent source for modification with many papers being published recently on direct amino acid modification. Increasing the steric bulk of the side chains results in increased stability, as enzyme recognition is disrupted.

One way to increase the overall stability of the full peptide is to swap L-amino acids to D-amino acids. The D-amino acid sequence has a decreased substrate recognition and binding affinity for proteolytic enzymes. An example of increasing the half-life of a biologically active peptide is modifying Somatostatin to Octreotide used to treat gastrointestinal tumours. Octreotide’s amino acid sequence incorporates two D-amino acids, whereas Somatostatin is only composed of L-amino acids (Fig. 1). The resulting half-life increases from a few minutes for Somatostatin to 1.5 hours for Octreotide hence enhancing favourable PK properties. Despite this example highlighting the benefits of L- to D-amino acid exchange, there are a few cases in which D-amino acid-containing peptides show a reduced half-life in comparison to the L-analogue. It is important to consider the effects that such modifications could have on the overall secondary structure of the peptide and on any intra or intermolecular interactions. An alternative is the use of D-peptides. These peptides are mirror images of the L-amino acid-containing counterpart and are composed fully of D-amino acids. The Kay group have recently developed D-peptides for use as HIV entry inhibitors. 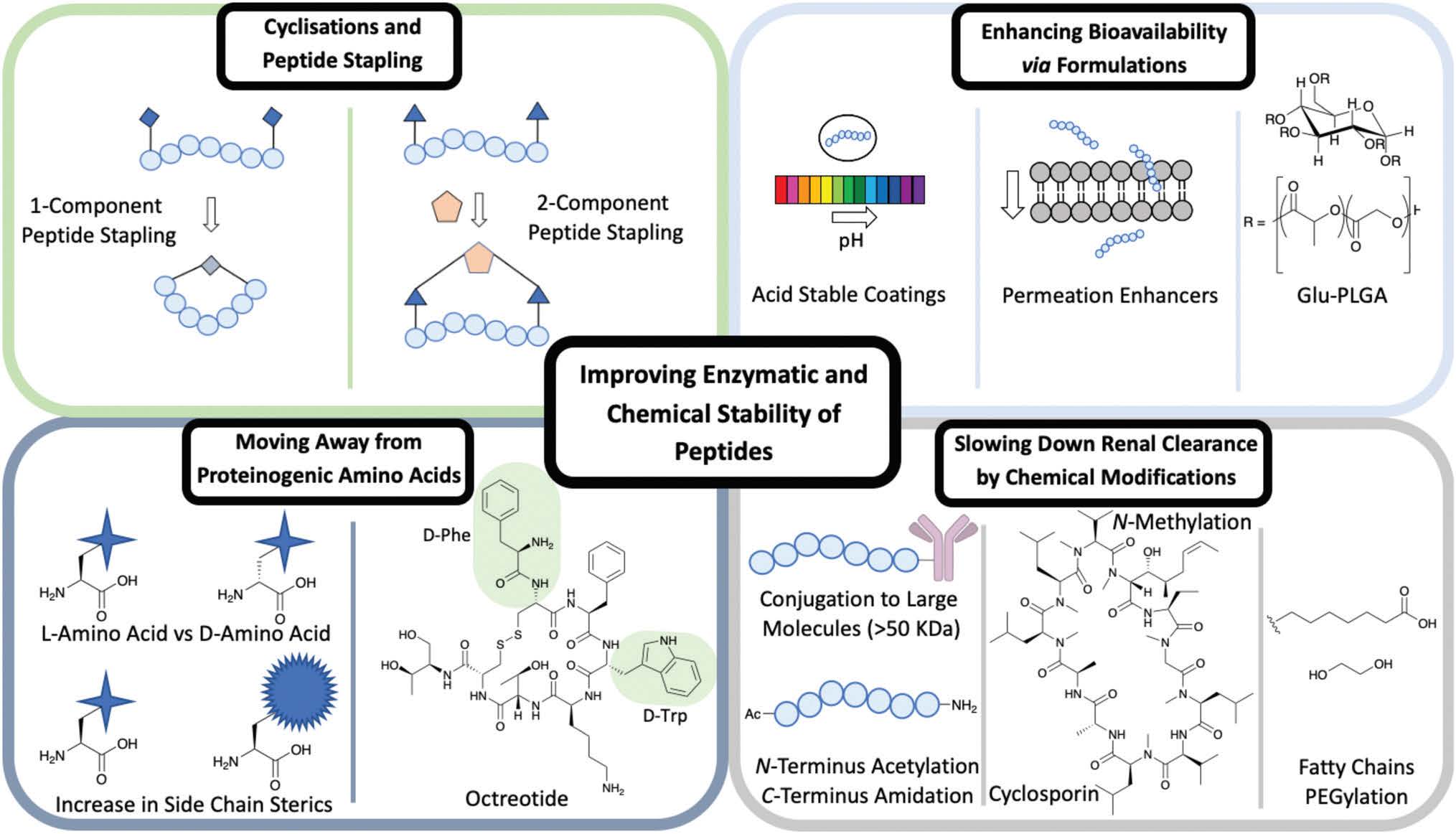 Fig. 1 Different methods used to improve the enzymatic and chemical stability of peptides including: cyclisations and peptide stapling, formulations, moving away from proteinogenic amino acids and chemical modifications.

The overall net charge for the peptide sequence is an important consideration for renal clearance. Peptides that acquire a net negative charge tend to exhibit a longer half-life in comparison to those with a net positive charge. The presence of anionic carbohydrate moieties found within the kidney’s glomerular membrane limit the filtration of anionically charged species into the urine.

Another approach is the conjugation of peptides with larger molecules (>50 kDa) to increase lipophilicity and their binding to albumin, thereby improving the PK and PD properties of peptides. It is the enhanced steric that prevent the conjugate from being filtered out through the kidneys and allow a longer circulation period. Modifications at the N- and C-terminus help slow down renal clearance. Typically the breakdown by exopeptidases of a peptide sequence occurs at the N- or C-terminus.

There are ways this can be prevented by modifying the terminus to increase proteolysis resistance. An amide bond between the C- and N-terminus achieved through a cyclisation reaction has been shown to prevent enzyme degradation. If cyclisation is not the preferred structure for binding, then N-acetylation and C-amidation can be an alternative to enhance resistance to proteolysis. These modifications have proven successful in a range of studies on Somatostatin, where the half-life of the modified molecule was extended when compared to the unmodified peptide.

N-Methylation of amide bonds is another modification that enhances metabolic resistance. N-Methylation increases the steric hindrance and allows tuning of the peptide conformation. Cyclosporin is an example of a naturally occurring peptide used as an immunosuppressive drug (Fig. 1). Cyclosporin is a hepta-N-methylated cyclic undecapeptide, with an oral bioavailability of 29%.

The use of polyethylene glycol (PEG) has been vastly explored in slowing down renal clearance and by increasing the binding to plasma proteins such as albumins. PEG is an ideal candidate for modification: it is cheap, biocompatible, hydrophilic, non-toxic and non-immunogenic. The promise of PEGylation for the modification of peptides is highlighted by a number of examples, which are discussed herein.

RGD is a homing tripeptide (see later), whose sequence is able to allow the HM-3 peptide to selectively bind to specific target sites that display high levels of integrins within tumours. The original HM-3 peptide had limited effect as a consequence of its short half-life and required twice a day administration. There was a need to enhance the peptide’s half-life to reduce the number of administrations needed. Methoxy-poly(ethylene glycol)-aldehyde (mPEG-ald) was the PEG linker of choice for attachment at the N-terminus. Upon this modification, there was a 5.86 fold increase in half-life in male rat studies when compared to the unmodified HM-3 peptide.

Another PEGylated peptide is PEG-adrenomedullin (PEG-ADM) by Bayer used in patients suffering from Acute Respiratory Distress Syndrome (ARDS) associated with lung failure. The peptide was enrolled into Phase 2 clinical trials in August 2020 with the predicted end date of early 2023.

PEG is not the only molecule used in conjugation to the peptide approaches to slow down renal clearance. Other widely used examples include polysialic acids (PSA), a homopolymer, and hydroxyethyl starch (HES), a branched amylopectin.

The addition of fatty chains has been an effective method as an addition to peptides to increase the half-life. Glucagon-like peptide (GLP-1) receptor agonists have been used to control blood sugar levels in patients with Type 2 diabetes. One of the earliest example is Exenatide, an analogue of a nonhuman peptide that in 2005 had twice-daily administration and an IV half-life of 30 minutes. In 2009 Liraglutide, a near analogue of human GLP-1, had a fatty acid chain with a spacer joined to the main peptide backbone for binding to albumin. Liraglutide represented a significant improvement of GLP-1 with an extended IV half-life of 8–10 hours and once-daily administration. Semaglutide is a GLP-1 agonist, with a gamma-Glu-2xOEG linker to a C18 fatty chain. The determined IV half-life was 46.1 hours through studies involving mini pigs, enabling once-weekly doses – a vast improvement to the early GLP-1 agonists.

Several methods have been used previously in the literature to enhance the oral bioavailability of peptide therapeutics via formulations. These can include permeation enhancers and acid-stable coatings (Fig. 1). Permeation enhancers are able to transport the peptide through epithelial cells – an alternative route is available through intercellular junction and adhesion protein interference resulting in a paracellular route. The use of acid-stable coatings to improve the oral availability of a drug is a widely used approach. These coatings are pH active, where at low pH in the stomach the coating remains intact; as the peptide moves to the intestine the pH rises and the coating breaks down to release the contents. The introduction of citric acid can be used to help neutralise the optimum basic pH conditions for a range of gastrointestinal peptidases, hence slowing down degradation caused by peptidases.

Formulations can be used to enhance the bioavailability of IV administrated peptides. The FDA approved Sandostatin LAR is an excellent example of this in which Octreotide is encapsulated in a glucose-poly(lactide-co-glycolide) (Glu-PLGA) star-shaped polymer (Fig. 1). Improving the overall chemical and enzymatic stability of a peptide using the techniques discussed is beneficial for the discovery of new therapeutics including targeted therapies exemplified by peptide–drug conjugates.